As is true with roles of all women in most societies and cultures of the world, the rules in Theravada Buddhism make it clear that “the order of female monks is subordinate to that of men” (Swearer 2010). Yes, it’s true that there are Theravada Buddhist doctrines that mention that it’s possible for women to attain the ultimate goal of nibbana, just as their male counterparts. However, it’s still made very clear that there isn’t equality between females or males—whether they are monks, nuns, or lay persons. Although women currently face a difficult path entering the monastic order in Theravada Buddhism, there are places where women are flourishing. These women give hope to future girls and women who aspire to live a monastic life. 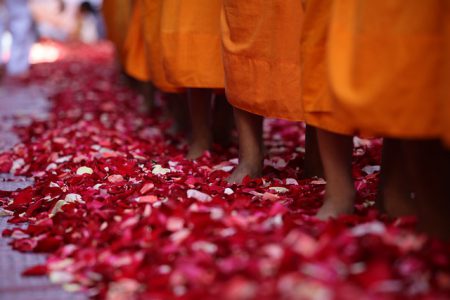 In Southeast Asia there are rituals held where adolescent boys receive “life passage” into the monastic order as novices. Quite often these young boys enter the monastic order to become educated; this is especially common amongst the poor children. The “bright and highly motivated” novice monk may even go on to complete college or move even further to obtain an advanced degree. Many monks make the decision to disrobe and take a non-religious job after teaching for several years. Most of the Theravada monks come from quite humble or even poor backgrounds; so living the Middle Way of Buddhism generally allows them a “definite improvement” to their “social or economic status” (Swearer 2010).

For girls and women, there aren’t as many opportunities to enter the monastic life in Theravada Buddhism. For example, “only Myanmar affords a parallel adolescent life passage ritual for women” into Buddhism, among the “Southeast Asian Theravada Buddhist countries” (Swearer 2010). Myanmar offers what is called a shinbyu ceremony, a celebration in which individuals of all ages and both sexes attend. The shinbyu is held in a structure that is made to look like a palace. Girls and boys dress in princess and prince costumes and sit on a stage in the center of the pavilion. While sitting on stage, mimes and storytellers perform historical stories and reenactments of the Buddha’s important life events, for the entertainment of the young girls and boys, as well as the audience. Once the entertainers have completed their programs, it is time for the “passage ritual.” The girls get their ears pierced, or “bored,” then the “boys’ heads are shaved.” The piercing of the girls’ ears indicate their passageway into “adult female roles.” However the boys, in addition to having their heads shaved, take vows to become novice monks that prepare them “to assume adult male roles in society” (Swearer 2010).

Groups of women who have chosen to turn their backs on worldly life, and instead pursue a monastic life (renunciants), are thriving in Southeast Asia today—but they are not technically bhikkhuni (members of the Theravada monastic order). Women who have decided to pursue a monastic life have come to “enjoy a higher social and spiritual status” (Swearer 2010) in Myanmar as compared to their female counterparts in Cambodia, Laos, and Thailand. In fact, the renunciant women in Myanmar manage “their own monasteries, pursue higher Buddhist studies, and take the national Pali exams” (Swearer 2010). These female renunciant women of Myanmar are allowed to collect donations and are sometimes allowed to have a novice ordination, similar to the male novice monks. The women in Myanmar are allowed to partake in more “religious-cultural institutions and practices” (Swearer 2010); which sets them apart from their Cambodian, Laos, and Thai counterparts.

It’s interesting to note that some Buddhist texts, written by male monks, were written in a positive way about females who gave up the worldly life for a spiritual monastic life (renunciants), as well as the generosity of the female lay people. However, the same authors’ in the same texts, also find negativity in these women’s life choices. Some of the texts refer to these same women as “a threat to the male renunciant order and as greedy, weak in wisdom, and inferior to men” (Swearer 2010).

Charles F. Keyes interprets some Theravada Buddhist traditions as showing women in a more positive light, including women’s ability to overcoming attachment. Mr. Keyes interprets some of the sermons, images, and traditions as women having more sensitivity and understanding of the suffering of others due to attachment; and that because of this, women naturally “embody more positive Buddhist values than do men” (Swearer 2010). As Mr. Keyes interprets it, men are more likely to act on immoral acts, and therefore need to be in a monastery to be trained against their natural tendencies. Whereas with women, these virtues “occur naturally” (Swearer 2010).

Just as the rest of the world changes, transformations are also being made in the Theravada Buddhist world. There are Buddhist women’s movements and organizations that both Buddhist nuns and Buddhist lay women are involved in, and even lead. One role the Buddhist women’s movement is trying to help change is the traditional role of Southeast Asian women. As in many societies across the world, women were thought of only as a wife and mother. The Southeast Asian society is traditionally a patriarchal society, so women were “primarily defined by men in relationship to men” (Swearer 2010). For instance, in the Theravada Buddhist world, this placed women in the roles of becoming wives, then mothers who gave birth to sons—who then became monks. Then, the mothers would make the food to donate to the monks and the monasteries. So women’s roles in life were all about taking care of the boys and men in their lives.

As with all societies, there is much change occurring in Southeast Asia. As occurs with any change, some are more open to these transformations than others. With the Theravada Buddhist women’s movements and organizations, it does seem that women are trying to find a larger, or—even more importantly—a more defined role in Theravada Buddhism.